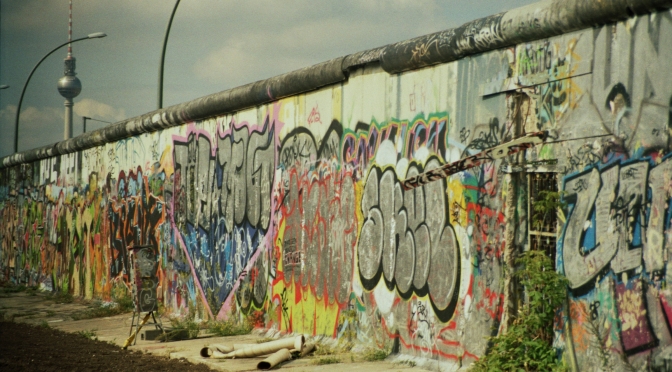 Berlin, the German capital, is a multicultural, fashionable and thriving place. History, political power and optimism helped shape Berlin into the city it is today.

And yet, you can still find relics from its socialist past all over the city. Whether its Checkpoint Charlie, the Berlin Wall, Marx & Engels statues… the past is being kept alive.

One institution specialised in this is the DDR Museum on the shore of the river Spree, right opposite the Berlin Dom. DDR is the German abbreviation for Deutsche Demokratische Republik, the German Democratic Republic or GDR. Showing the lifestyle of the eastern part of the city between 1946 and 1989, this interactive museum lets visitors experience life on the other side of the Wall. Sit down in a typical living room, complete with music to listen to, and test your DDR knowledge with a quiz. Nothing says “DDR” however, like a “Trabi.”

To experience driving this East German cult vehicle Trabant, the directors of the museum came up with a brilliant idea. While you sit in the (stationary) car and push the pedal down, a video will play and show you around a typical working class neighbourhood of East Berlin, complete with all the noises you’d expect from the car and the housing estate. 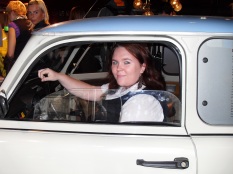 “Driving” a Trabi at the DDR Museum ©Cornelia Kaufmann

The beautiful thing about this museum is that it focuses on the human angle rather than history and data. Everything is hands on, there is loads on display and even the shelves look like the typical East German high-rise blocks. Even though the museum is tucked away between riverfront cafés and bistros, it is well worth a visit. Back in 2008, it even became European Museum of the Year.

There are quite a few more places to check out when you’re interested in Berlin’s past. For example Checkpoint Charlie, the most famous, still remaining Allied border checkpoint. The close-by House at Checkpoint Charlie museum has one of the most extensive DDR collections in the country.

The longest unbroken stretch of the Berlin Wall still standing today is at the East Side Gallery near Warschauer Strasse along the river Spree. Now covered in all sorts of murals and graffiti, it stands as a reminder that escaping the East was extremely dangerous and often fatal. Now, a part of the former Death Zone is a beach club. Berlin has changed for the better.

Until 1989, getting this close to the Berlin Wall (here at East Side Gallery) would have got me killed. ©Cornelia Kaufmann

Chilling out on deck chairs along the shore of the river Spree. ©Cornelia Kaufmann

No visit to Eastern Berlin is complete without a visit to its main square Alexanderplatz, one of the biggest public squares and train stations in the city. The TV tower with revolving restaurant looms over the square and the Weltzeituhr, (World Time Clock) and is a very visual focal point, no matter where you are in Berlin.

Berlin offers something for everyone. Art and archaeology lovers will delight in the many museums, the collections of which include the famous bust of Nefertiti and the Ishtar Gate of Babylon.

Shopping-wise, Berlin can offer up everything from luxury shopping on Ku’damm and at  Berlin’s main department store KaDeWe (Kaufhaus Des Westens), to the flea markets at Arkonaplatz and Mauerpark. Alternative and sub-cultures have always strived in Berlin, which makes the city such a fantastic multicultural place to be.