Amsterdam. Who hasn’t heard stories of canals, red lights and joints? But Amsterdam is so much more than that!

It is incredibly easy to find your way around the city. Especially in the Centrum, all you have to do is follow the Grachten, the small canals that run in rings from the Amstel and the IJ all around the city centre. To find your way back, you just need to remember how often you crossed the water.

Amsterdam is full of bicycles and cyclists do have right of way. Mind you, a lot of the streets in the old town are cobblestoned, but riding your bike along the shore of the Grachten will make you feel like a native in no time.

The entire city is a very picturesque place. Tall but narrow former trading stations and storehouses line the canals, with their colourful shutters and ancient pulley systems still looking like they did in 1650. Maybe it’s surprising that Amsterdam’s Red Light District is right in the centrum, just east of the main thoroughfare Damrak. Just wondering through town you probably wouldn’t immediately realise. Yes, there are red lights and drawn curtains, neon signs and sex shops, but none of it looks seedy. Maybe it’s because the Dutch are so open about sex. Sex is not a taboo subject and it’s not hidden away. On the contrary, sex shops and fashion boutiques stand door to door, and all have their doors open and merchandise on prominent display. In fact, the sales assistants will be just as happy to help you find what you’re looking for as the assistant in the cheese shop round the corner or the bloke stocking the shelves in the supermarket.

Stories about smoking weed legally in the Netherlands abound, however not all of them are factual. If you were under the impression that everyone runs around in the streets smoking joints and dealing marijuana, you’d be wrong. Technically, even the fabled Coffee Shops are in a grey area of the law. Yes, you could get a joint there, and official shops are tolerated, but it’s not necessarily legal. You also can’t take anything outside. However, the police would rather know that people are taking recreational drugs in a more or less secure environment. Being under the influence is still an offence, though.

Walking around the Damrak and Centrum at night, it’s shocking to see how many tourists clearly only came for the drugs and overestimated their tolerance level. On some street corners you can hardly get through the (sweet-smelling) crowds as they sprawl out or pass out and sleep it off. In that regard, I really have to highly commend the coffee shop bouncers, who’ll keep an eye out and get sugar water to those tourists who really seem to be in a bad way.

But away from the seedy side. No trip to Amsterdam is complete without a cruise on the Grachten. Life has a different pace on the river and canals. Small cafés on the shore and the Bloemenmarkt (the Flower Market) invite you to stroll and relax. 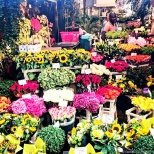 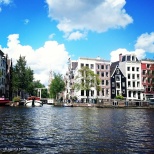 A Gracht in Amsterdam ©Cornelia Kaufmann

Amsterdam is also renowned for art collections and famous museums featuring the best of the best of the Dutch masters, from Het Rembrandthuis to Rijksmuseum and the Van Gogh Museum. One of the most poignant museums in Amsterdam has nothing to do with art, however. It’s the Anne Frank Huis, the house in which Anne Frank and her family hid during the second World War until they were betrayed. It’s a sobering experience but in today’s political climate more important than ever.

Amsterdam is always worth the trip. And trying some local Dutch specialities like cheese or proper, Dutch pancakes makes the trip even sweeter. 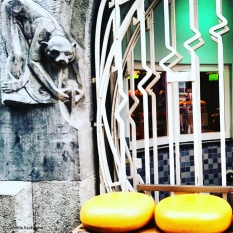 Graffiti along a Gracht in Amsterdam ©Cornelia Kaufmann