Hello my lovelies!!
Welcome to another Weekend Coffee Share from London!
Man, where’s the week gone? My holiday is almost over already. And what a time I’ve had.

If we were having coffee today, I’d tell you all about it!

I got to London last Saturday. Off the train at King’s Cross St. Pancras and straight into the YHA across the street. I had just enough time for a cuppa before I met the Blogger Bash bloggers at the British Library. They included the lovely Melissa, Sacha, Hugh, Dylan, Graeme, Helen and many more. I will link to them once I’m back on my computer on Monday. It was awesome to meet so many lovely people and fellow bloggers. We ended up holding the first annual Blogger Bash awards at Pizza Express and I stayed for 4 hours. People were amazed that I came over from Germany, although most travelled in to be there.

If we were having coffee, I’d tell you that I went to see the play Constellations at Trafalgar Studios last Saturday. It was the final performance and it was amazing. The play is a bit confusing at first, but once you understand the concept, the various nuances become so much clearer. Especially leading lady Louise Brealey (Sherlock, Delicious) did a spectacular job, including a scene entirely in sign language.

I actually met both actors, Louise Brealey and Joe Armstrong, after the performance. Joe made us promise not to post his picture, which I will respect. But here’s me with Loo:

If we were having coffee, I’d tell you I had to get up early on Sunday to get to Paddington station in order to catch my train to Cardiff Central. I met up with Laura, whom I went to university with, and her 4 year old daughter Lily. Together, we went to the Doctor Who Experience which was a lot of nerdy fun! Afterwards, we spent the afternoon on the beach and pier at Penarth catching up. On Monday, we visited Cardiff Castle before I had to make my way back to London.

If we were having coffee I’d tell you about Monday evening. Because I went to a pub quiz. But not just any pub quiz. This particular one was at The Grapes on Limehouse. It’s one of the oldest pubs in London and has been frequented by Charles Dickens. Nowadays, it belongs to Sir Ian McKellen (The Hobbit, Lord of the Rings, X-Men). Gandalf’s staff is kept behind the bar.

I got talking to a guy from Rochdale, and we entered the pub quiz – with Ian McKellen sitting on the next table and also competing! I don’t think there’s any shame in admitting Ian was better (his team came 5th, we were 8th). We missed out on the prize of free drinks, but I got a consolation prize 12 years on the making. I finally got a chance to talk to Ian McKellen, who was very softly spoken and a complete gent, and got his autograph. 12 years ago at the Return of the King world premiere on Wellington, he held my poster but eventually walked on without signing it.

On Tuesday, I met up with another coursemate from uni, Lauren, and her 4 months old son Cameron. Together we spent the day browsing the markets in Camden and the British Museum.

If we were having coffee, I’d tell you about my trip to Brighton on Wednesday. It was another early start, for me, and I went to Lewes before I actually went to Brighton. I went to Union Music Store, run by Jamie Freeman of The Jamie Freeman Agreement. I’ve been following the band for 2 years and wanted to see what the store’s all about. Unfortunately Jamie wasn’t there, but I had a lovely chat with his wife Stevie about crammed in-store gigs. It is a tiny space!

In Brighton I did the touristy thing and looked around the Pier and Royal Pavilion. It turned out sunnier than expected and I got a sunburn. All in all, it was a nice day out, though I’m still not a fan of the British seaside (I’ve lived in Southport for 3 years after all, I know what I’m talking about).

If we were having coffee today, I’d apologise for rambling but there’s just so much to tell!

On Thursday, I got a taste of what it means to be a Londoner when the tube staff went on strike. Crammed into the bus I had to wait 45 mins for (the others were so full they weren’t taking anyone else on) I made my way to Baker Street and The Sherlock Holmes Museum. The queue was massive, but on light of the tube strike I hadn’t planned on doing much anyway.

I ended up taking a hop on hop off bus around London for the afternoon. It finally got me past the major landmarks and killed about 4 hours. I got off at Aldwych and walked across Waterloo Bridge to the National Theatre.

Thursday night, I saw Three Days In The Country, starring John Simm (Life on Mars, Doctor Who, Prey ) and Mark Gatiss (Sherlock, Doctor Who, Mapp & Lucia). The acting was brilliant, the roles expertly cast. Dr Shpigelsky’s proposal scene (Mark Gatiss) was hilarious and needed an actor of Mark’s calibre to pull it off.

After the show, I met John Simm and Mark Gatiss, who were both very lovely. I ended up catching the last 59 Bus from Waterloo Bridge (the ones before didn’t show) to British Library together with all the riff raff. Can I call myself a Londoner now?

Meeting actor John Simm after a performance of Three Days In The Country at the National Theatre, London © Cornelia Kaufmann 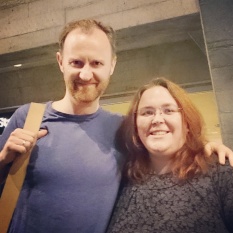 Meeting actor Mark Gatiss after a performance of Three Days In The Country at the National Theatre. © Cornelia Kaufmann

Then yesterday, I spent my time around Covent Garden, Seven Dials, Neal’s Yard and the book shops on Charing Cross Road as well as at Stanford’s of Longacre – a shop a travel journalist can’t possibly miss.

Last night was the one performance that had prompted this trip to London: Hamlet at the Barbican, starring Benedict Cumberbatch! The acting was superb, and Hamlet’s descent into madness was probably the funniest version this tragedy has seen in a while. It was over the top, as theatre is wont to be, but still fitting. However, there were complications. Jim Norton, who plays Polonius, fell ill on stage within the first 30 minutes and was not able to continue. The director made the decision to have Nigel Carrington, who plays Cornelius, take over as Polonius. I’m not sure whether he’s actually the understudy for the part or not. But he had to use the script. Where possible, he tried to incorporate it into his acting, something Benedict Cumberbatch also helped with – proving he is capable of improvisation. The rest of the play went smoothly, but one thing I had problems with: you couldn’t tell what time period the play was meant to be set in. The set, beautiful as it was, looked out of the 1870’s, the uniforms as well, the household uniforms and study furniture and electronics looked like they’d come out of WW2 and Hamlet was wearing jeans and a zipped hoodie. Those were too many clashes, in my opinion, and cost the production points in my book.

Full reviews of the three plays will follow next week.

Today I’m being lazy. I’ve just been shopping and now I’m back at the YHA, putting a wash on. The glamorous life of the backpacker.

If we were having coffee today I’d have one last thing to tell you. My Midori Traveler’s Notebook has proven itself as a fantastic travel companion. I’m so glad I invested in it!

So, that’s it, my ultra long update from London. As you can tell I’m having a blast, I even caught the sun a bit, just been served by the loveliest gay shop assistant ever (who wanted my opinion about 2 shirts he had picked out for himself for a wedding) and I don’t want to stop travelling again.

Anyway, that’s it. Find the other Weekend Coffee Sharers via the links at Part Time Monster or the #WeekendCoffeeShare hashtag.

Thank you for having coffee with me! Same time, next week?

5 thoughts on “If We Were Having Coffee… On August 8”