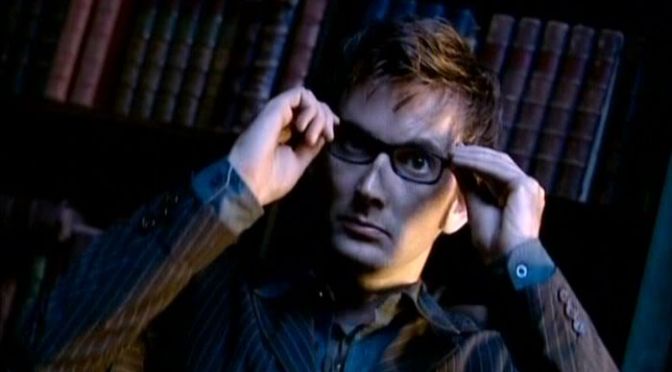 The Doctor of BBC’s Doctor Who might be a world-saving, time-travelling 900-odd-year-old alien, but even he makes time for a good book or two in his hectic life.

What started over 50 years ago as a (somewhat) educational filler-programme is teaching kids today (in a very sneaky way) that literature isn’t dull. Literary references abound on the show, and the Doctor is showing a whole new generation that it’s perfectly acceptable to geek out a little when you meet your favourite author or cry over fictional characters. Sometimes, the literary nods are subtle, a throw-away line here or a sneaky glimpse of something there, but sometimes they are bold and in your face. For example, there are a whole episodes dedicated to William Shakespeare, Charles Dickens and Agatha Christie.

Some episodes were even written by famous authors. The list of authors includes such names like Ben Aaronovitch (known for Rivers of London), Douglas Adams (known for Hitchhiker’s Guide to the Galaxy), Neil Gaiman (known for Neverwhere) and Mark Gatiss (known for the Lucifer Box trilogy).

As it is World Book Day today (except in the UK, because they’re special little snowflakes) I compiled a list of 40 references to literature or reading on Doctor Who, with a little help from my cousin.

Have we missed anything?

2.) He understands that knowledge is the best weapon. In Tooth and Claw, he says this: “You want weapons? We’re in a library. Books are the best weapons in the world. This room’s the greatest arsenal we could have. Arm yourself!”

3.) He travels to a planet called The Library and can tell by the wind direction what section he is in. He mentions whole continents of Bridget Jones and Monthy Pythons Big Red Book.

4.) He went ahead in time to read Harry Potter and the Deathly Hallows, commenting (well before the book was published):

5.) He’s an Agatha Christie fanboy! The Doctor remarked several times he’d like to meet her and in The Unicorn and the Wasp he finally does and solves a mystery with her. Although the Tardis is infinite, he keeps a copy of Christie’s book Death in the Clouds from the year five billion in a chest marked “C” in the main control room.

6.) He reads up on Advanced Quantum Mechanics for a bit of light reading. Very Hermione Granger. The book also has the Tardis on the dust jacket.

7.) There’s at least one massive medieval library on board the Tardis.

8.) He is a massive Charles Dickens fan, the 9th Doctor met him on Christmas Eve and fought ghosts with him in The Unquiet Dead, alluding to Dicken’s classic A Christmas Carol.

9.) In The Snowman, the 11th Doctor dresses up and calls himself Sherlock Holmes, going around and making ridiculous (and completely false) deductions. Sir Arthur Conan Doyle, and Holmes’ origins in The Strand magazine, are also mentioned in that episode.

10.) He defeats aliens while he’s still wearing his pyjamas and a dressing gown, commenting it’s “very Arthur Dent.” Arthur is the protagonist of The Hitchhiker’s Guide to the Galaxy. The author of Hitchhiker’s, Douglas Adams, wrote for the Classic Doctor Who series.

11.) One Christmas Special is called A Christmas Carol and somewhat follows the plot with a time-travelling, alien twist.

12.) There’s an episode called The Doctor, the Widow and the Wardrobe, a clear reference to the Chronicles of Narnia.

13.) He is shown as the inspiration behind Pandora’s Box, as he was the most feared creature by all other aliens, and they locked him into a box called Pandorica.

14.) He cites Dylan Thomas‘s poem Do not go gentle into that good night in The Shakespeare Code

15.) The Doctor understands how hard it can be to return to the real world after you’ve finished a good book and is shown in The Angels take Manhattan to always rip out the last page so the story doesn’t have to end.

17.) He reads out loud and comments on events, most notably by saying “Yowza” in The Angels Take Manhattan.

18.) He never questions where a book comes from, he just goes ahead and reads it anyway, sometimes choosing a book just because he liked the cover. This is especially apparent when he says he found the book he’s reading  in his pocket but had no idea how it got there.

19.) He knows that no matter how much technology advances, you’ll never replicate the reassuring smell of old books.

20.) Shakespeare defeats witches by shouting the disarming spell “Expelliarmus” (provided by Martha) at which point the Doctor remarks: “Good old J.K.” meaning Harry Potter author J.K. Rowling. The Doctor also has a “collection of all 11 Harry Potter books” on the Tardis. It’s totally cool to be a fan.

22.) Even the Doctor thought Robin Hood was just a legend – until the 12th Doctor met him and fought alongside Robin Hood and his merry men.

24.) In The Lazarus Experiment, the Doctor instantly recognises a poem and finishes the quote, showing he read and memorised T.S. Eliot’s The Hollow Men.

25.) He thinks of a person’s life as a story, and that whatever happens, we’re all stories in the end.

26.) He must have read The Hobbit or The Lord of the Rings (or both) at some point and seen similarities between himself and a certain grey wizard. River also mentions that the good wizard in fairytales often turns out to be him.

27.) He does have a few favourite words and thinks about the beauty of words.

28.) The Doctor wears reading glasses, admitting they DO help. Plus, there’s always this:

29.) For her first trip, the Doctor takes Martha to 1599 London. Before she leaves the Tardis, the Doctor remarks: “Beyond those doors – brave new world”, a reference to Aldous Huxley’s Brave New World.

30.) He describes Shakespeare as a genius who always uses the most perfect words – and is visibly disappointed when the first thing Shakespeare says is “shut your big fat mouth” to a heckler in the audience, to which Martha remarks that you should never meet your heroes.

31.) Martha asks for clarification when Shakespeare tells her his son was called “Hamnet,” expecting it to be Hamlet. The Doctor knew that Shakespeare lost his son to the plague.

32.) The Doctor unwittingly helps Shakespeare coin some of his most famous lines, including “All the world’s a stage” and “To be or not to be”. While Shakespeare likes “To be…”, he also thinks it’s a bit pretentious.

33.) Shakespeare composes sonnet 18 (“Shall I compare the to a summer’s day”) for Martha, whom he calls his “Dark Lady” – many of Shakespeare’s works were dedicated to a dark lady of unknown identity.

34.) The Doctor also read up on Shakespeare and the theory he might have been bisexual, commenting “57 academics just punched the air” when Shakespeare flirts with him. Basically, the Doctor has a massive man-crush on Shakespeare.

35.) The Doctor owns the only signed copy of The Quarry in the universe.

36.) He owns a signed first printing of Agatha Christie’s The Murder of Roger Ackroyd, which is missing its last page.

37.) Among the books in his library are: Jane’s Spaceships,  Every Gallifreyan Child’s Pop Up Book of Nasty Creatures From Other Dimensions, The Time Machine by H.G. Wells, Robinson Crusoe by Daniel Defoe, War and Peace by Leo Tolstoy, The Wonderful Wizard of Oz by Lyman Frank Baum, The i-Spy Book of British Birds, Can you forgive her? by Anthony Trollope, books by Truman Capote and Karel Capek, The Encyclopaedia Gallifreya and The History of the Time War, just to name a few. The last one is curious though. Only the Doctor really knows what happened, so chances are he wrote the book!

38.) In the Library, the Doctor says that he loves biographies as there is always a good death at the end, and “death gives us size.”

39.) He knows that reading ahead will ruin the surprise of major plot developments and tries to stay away from spoilers.

40.) And finally, when the 10th Doctor is asked by William Shakespeare how “someone so young can have eyes so old,” the Doctor replies: “I do a lot of reading“

(Source for all pictures: BBC’s Doctor Who)

6 thoughts on “The Doctor Who makes reading cool”