Here’s a little fun post I spotted a while back via My Little Book Blog, who had the idea from The Book Coop: The Bookshelf Tag.

As it’s World Book Day, I thought I’d share my bookshelf with you. How about you? What’s your shelf like?

I’d like to think of mine as quite a good mixture of titles and genres. Unfortunately, I had to leave many of my books behind when I left England to move back to Germany, so I am still rebuilding my personal library.

1. Describe your bookshelf (or wherever it is you keep your books -it doesn’t actually have to be a shelf!) and where you got it from.

My main bookshelf is a combination of three IKEA Billy shelves and it takes up one wall of my living room. While I also keep souvenirs, DVDs and photos on the shelves, most of the room is taken up by books.

Textbooks and dictionaries live in a small hanging cupboard above my desk. The glass-fronted cabinet next to my desk is filled with travel guides, books on languages and photography, and a few of my bigger books, including the Brockhaus Encyclopædia.

I’ve got a few cube IKEA Expedits (just single cubes) in my bedroom. In one, I keep older books I got from my gran like a 1950 version of A tree grows in Brooklyn and a 1947 copy of Bel Ami, as well as older copies of Tai-Pan, In Cold Blood and Lucrezia Borgia. On top and next to that cube is my current To Be Read pile as part of my 60 Books Challenge.

Part of my To Be Read pile. 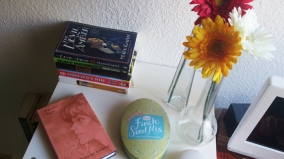 To be Read – stack in the bedroom

Some of the books I received from my grandmother.

2. Do you have any special or different way of organizing your books?

They are all sorted by size as well, and series are kept together, in order.

3. What’s the thickest (most amount of pages) book on your shelf?

4. What’s the thinnest (least amount of pages) book on your shelf?

Das Schiff Esperanza by Fred von Hoerschelmann has only 51 pages.

I also have a copy of Fräulein Tugendschön, die edle Gouvernante und andere Humoresken by Karl Ettlinger (originally from 1923), which my German teacher typed up and bound himself as graduation gifts for my Advanced German course at Grammar School. His version has 60 A5 pages, and he personalised every copy with a message.

5. What’s the smallest (height and width wise) book on your shelf?

On my shelf right now are:

6. What’s the biggest (height and width wise) book on your shelf?

Another, illustrated version collection of works by Wilhelm Busch.

7. Is there a book from a friend on your shelf?

Well, I do have books that friends have written, like Menschen mit Meer by Alex Hofmann and Die Spiegelsinfonie by Lilian Muscutt, but I do not borrow books from friends.

9. The last book you read on your shelf?

The Vesuvius Club by Mark Gatiss

10. Of all the books on your shelf, which was the first you read?

I have all the Harry Potter books in English and German, and Harry Potter and the Philosopher’s Stone in French as well.

I own The Hobbit, Lord of the Rings trilogy, some of Bill Bryson’s books, The curious incident of the dog in the night-time, Animal Farm in English and German.

I also have duplicates of the 1956 version of Vom Winde verweht (Gone with the wind) by Margaret Mitchell and the 1950s version of Der Glöckner von Notre Dame (The hunchback of Notre Dame) by Victor Hugo.

Die Bekenntnisse des Hochstaplers Felix Krull by Thomas Mann was required reading in school, so I own a paperback copy of it. Then I found a copy from the 1950s with a painted cover while browsing a fleamarket and bought it. Last year, I found the exact same version on my gran’s shelf. I still don’t like the book, or Thomas Mann’s writing.

My Harry Potter shelf, containing the German hardcovers (left) and the English versions on the right (the first three books are paperbacks)

12. Do you have the complete series of any book series?

My Tolkien collection including The Silmarillion, The Hobbit and The Lord of the Rings

Part of my Kathy Reichs collection

13. What’s the newest addition to your shelf?

14. What book has been on your shelf FOREVER?

15. What’s the most recently published book on your shelf?

As the only active reader in the family, I got most of the family heirlooms. The oldest is a Holy Bible from 1897, but I also have the Collected Works by Friedrich Schiller dating back to 1910 and two Gustav Freytag books (Soll und Haben and Die verlorene Handschrift) which were gifted to my granddad’s boss in 1926 and 1923 respectively, so I’m assuming they were new when they were given away.

They are all still printed in Fraktur / Gothic typeface (the Old German typeface).

Collected works by Schiller, dating back to 1910

18. A book you’d hate to let out of your sight (aka a book you never let someone borrow)?

All of them, after the last book was horribly mistreated.

I buy a lot of my books second hand in all sorts of conditions. Though my copy of The Hobbit is really beat up now after I lent it to a friend (see above).

The Collected Works by Friedrich Schiller (heirloom) from 1910 is also starting to fall apart, but that’s because the spine ot damaged 100 years ago, I’ve been told.

21. A book from your childhood?

22. A book that’s not actually your book?

All of the books my gran gifted me from her own collection as she is going blind and can no longer read. That’s around 60 books by now, but she still has a crate full of books waiting for me to collect it.

Cover of a 1950s version of Thomas Mann’s Die Buddenbrooks

24. A book that is your favourite colour?

The Lord of the Flies by William Golding with the burnt-orange cover.

25. Book that’s been on your shelf the longest that you STILL haven’t read?

Hoping to expand the list on Saturday after the Rock ‘n’ Roll Benefit Reading which will feature local autors.

One thought on “The Bookshelf Tag”