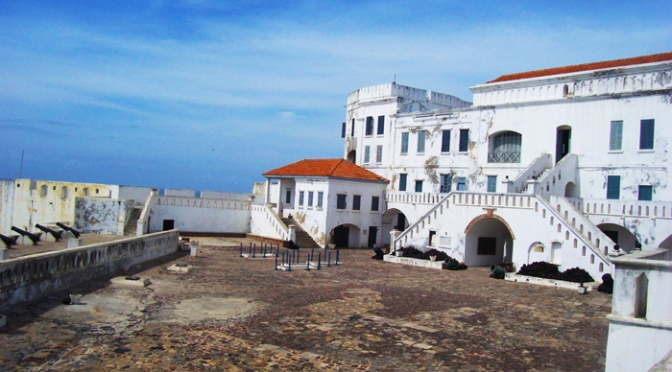 Today, Cape Coast is the capital of Ghana’s Central Region, located on the coast of the Gulf of Guinea. It is a well-known fishing port and the city is home to some of Ghana’s best schools as well as the University of Cape Coast. The heritage of the various colonising powers, which laid claim to the town for centuries, can be seen everywhere.

Cape Coast Castle is one of the city’s main attractions and looking at the white-washed building, you’d never guess what a tragic role it played in the lives of thousands – if not millions – of people.

This castle, which lies directly above the port, used to be known the world over, and it was feared by the local population. Cape Coast was one of the ports used on the Middle Passage of the slave trade – and for many African slaves imprisonment at Cape Coast Castle marked their last few days or hours on African soil.

Courtyard of Cape Coast Castle as seen from the Door of No Return. Copyright Cornelia Kaufmann

Male slave dungeon at Cape Coast Castle. Hundreds of people were kept in here for days at a time. Photo by Cornelia Kaufmann

The Door of Return – seen from the port-side. Photo by Cornelia Kaufmann

Tours offered at the castle are a chilling and sometimes even overwhelming experience, as you get to enter some of the dungeons and see the shackles. Though the most heart-breaking sight there is a simple wooden door. Above it is a small sign. It simply reads “Door Of No Return.” Once the slaves had passed through this door they started their long and often fatal journey across the Atlantic Ocean to the Caribbean and beyond. That small doorway on the Cape Coast Castle was the last little bit of home that they’d see.

These days, the gate can be walked through in either direction and the sandy beaches and town squares are popular spots for impromptu games and markets. 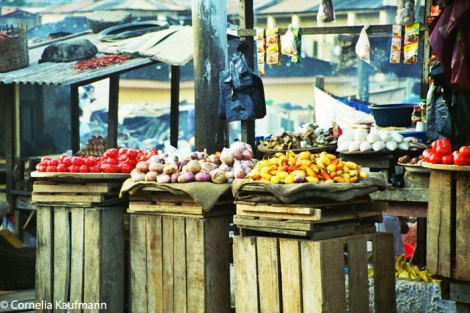 Cape Coast is also a great base for trips into Kakum National Park. Taxis and minibus taxis called “tro-tros” can get you to the entrance gate about 30km inland. This tropical rainforest park was designated a National Park thanks to an initiative by the local residents.

Kakum also offers a unique feature that is not found elsewhere in all of Africa: a canopy walkway! It’s a short hike from the visitor centre to the start of the canopy walkway, which lies about 40m above ground level in the tree tops. It’s a mixture of rope bridges, planks and platforms, with 7 bridges connecting to viewing platforms around thicker trees. It’s total length is around 350m and it is not for the faint-hearted. The narrow bridges swing a little bit, which is why only two people should be on a bridge at a time, and although there’s a secure net on the sides, it is still a long way down.

But if you’re brave enough you might be able to spot Kakum’s diverse fauna, which not only includes rare birds but also galagos (bushbabies), buffalo, duikers, leopards and forest elephants.

At the end of the hike, you’re rewarded with fresh coconuts. Forget those little things they sell in European supermarkets. Ghanaian coconuts have the most refreshing water there is, especially after a day of hiking in Kakum. 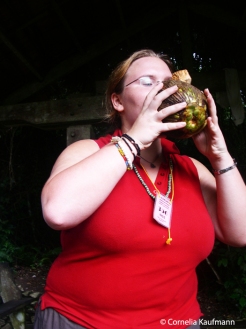 Enjoying a coconut with friends to celebrate a successful hike. Copyright Cornelia Kaufmann

The Canopy Walkway is unique in Africa, 40m above ground and 350m long across 7 bridges and platforms. Copyright Cornelia Kaufmann